The train on platform 3 is for Hollywood…

What do Killing Eve, Breeders, I Hate Suzi and the film Yesterday all have in common? The answer is they were all filmed on location on Greater Anglia trains or stations.

They are among an increasing number of films, TV dramas and documentaries, adverts and even fashion shoots which use the railway in East Anglia as a backdrop. Since 2018, Greater Anglia has employed Adrian Booth to act as a commercial film liaison manager. The company was getting regular requests from film-makers to use Greater Anglia locations, but was turning them down as there was no-one who could make all the arrangements on top of their existing jobs.

“We really wanted to support the British film industry and also our local communities and businesses by facilitating filming requests, so we decided to hire someone whose sole job is to make all the necessary arrangements so filming could happen,” said Martin Moran, Greater Anglia commercial director. “Not only does hosting the film crews boost the local economy around the station where filming is taking place, but it puts another string in our region’s bow as an ideal place for filming to take place – if production companies know that filming on trains and stations is an option in this area. It’s also good to be supporting the British film industry – although it’s not restricted to this nation’s film industry – we’ve also had major Bollywood shoots on our trains and stations.”

One of the first films with a Greater Anglia backdrop was Yesterday – the Danny Boyle and Richard Curtis film starring Himesh Patel who wakes up after a knock to the head in a world where the Beatles don’t exist and then goes onto become famous wowing the world with their songs. The film was made on location in East Anglia – including a shoot involving hundreds of extras on Gorleston beach, near Great Yarmouth, and a cameo appearance by Ed Sheeran. Eagle-eyed rail enthusiasts may have spotted one of Greater Anglia’s quietest rural stations, Buckenham, in the film. Buckenham, a request stop on the Norwich to Lowestoft line, was the location of a recording studio where Himesh Patel’s character recorded an album.

Buckenham station was chosen because the former station building is a recording studio in real life, called Sonic Fruit. The film script was slightly tweaked because Danny Boyle was so taken with the real-life studio. The studio in the film was named “Tracks on the Tracks” and recording of the album was paused while a train went past. The train was originally a Greater Anglia train, but it was adapted in production to be faster and longer. Bennet Maples, Sonic Fruit’s head engineer and studio owner, said:  “It was a huge thrill to meet Danny Boyle, and so exciting to see a film of this size utilise locations in this area. There is a thriving film industry in East Anglia which we are extremely proud to be a part of, and it was great to see Danny Boyle and (screenwriter) Richard Curtis embrace that.”

Images of railway carriage interiors, stations and passing trains are often used by film-makers as backdrops to convey a sense of movement and to provide a perfect segue to move characters from one location to the next.

Stations are places of arrival and departure and are handy locations for dramatic moments to unfold, while seated passengers often exchange key dialogue. In Killing Eve, a dramatic chase involving Eve and Russian baddie Konstantin took place on a Greater Anglia platform at Liverpool Street station with Villanelle escaping on board one of the train company’s Stansted Express trains. In the drama, Liverpool Street was actually an unnamed station in Scotland. Greater Anglia’s train planning team made some platform space available at Liverpool Street and supplied a train overnight one Sunday for the filming.

Greater Anglia lead train planner Michael Lewis said: “Generally when we supply a train and crew they are able to shunt up and down in a platform at the request of the film director. The biggest plan for us was for an Apple TV show which required two platforms at Liverpool Street and a number of additional services so that they could film on the go on board during two days of filming one weekend. We were able to take advantage of the reduced service due to the lockdown – it would have been considerably more challenging in normal times.”

Michael added: “It normally works by Adrian either contacting me with a rough proposal and then after a fair bit of toing and froing we get a clearer idea of what’s required by the film company and what’s actually possible. Then we go away draw up plans, send these back to Adrian who will then get confirmation for us to go ahead. There have been a few that we haven’t been able to accommodate due to timescales or other impracticalities, but generally we are normally able to help.” 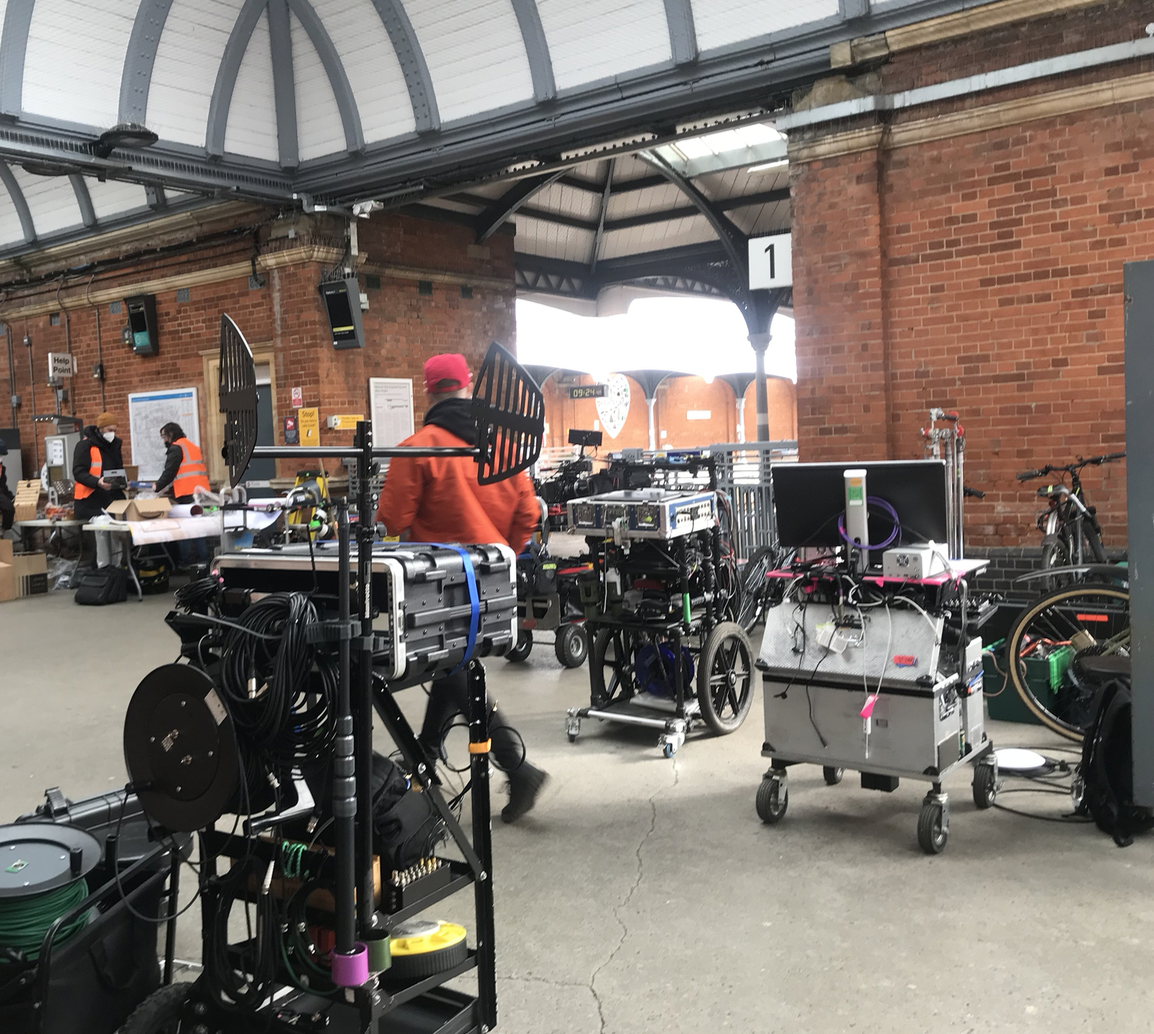 Some of Greater Anglia’s stations close to London have proved popular filming locations due to their proximity to London and the M25 – such as Hertford East, Cambridge, Stansted Airport and Southend Victoria lines.

“I played myself,” said Ivor. “All I had to do was to check tickets as “passengers” walked through the exit gates. It was a very interesting day. It was amazing to see how much work goes into filming and how much effort and time goes in.”

Adrian said: “A lot of time is spent looking at production teams’ requests and suggesting ways in which they might be facilitated. Access requires careful planning and needs to be carefully managed. We cannot allow customer access to be limited or for passengers to be inconvenienced – and we definitely can’t delay services. We select quieter times when customer numbers are lower, which limits the impact on customers.We have to make sure that all health and safety requirements are met – as the railway has many potential hazards.  Generally there’s a buzz among Greater Anglia staff when we are working with film/TV and high end drama productions. It’s something interesting and different. Catching a glimpse of a celebrity is always enjoyed. It’s fascinating to see behind the scenes of these productions. There are so many people involved and so much equipment. It’s a bit like the circus coming to town. Crews of 60 are not unusual, at times there are even more, with supporting actors. Jack Ryan saw around 120 people involved in the production. Although it’s not always the case – sometimes there is a crew of just ten, including actors.”

So next time you’re on a Greater Anglia train or station, look a little closer – you may just recognise it from the TV or big screen.