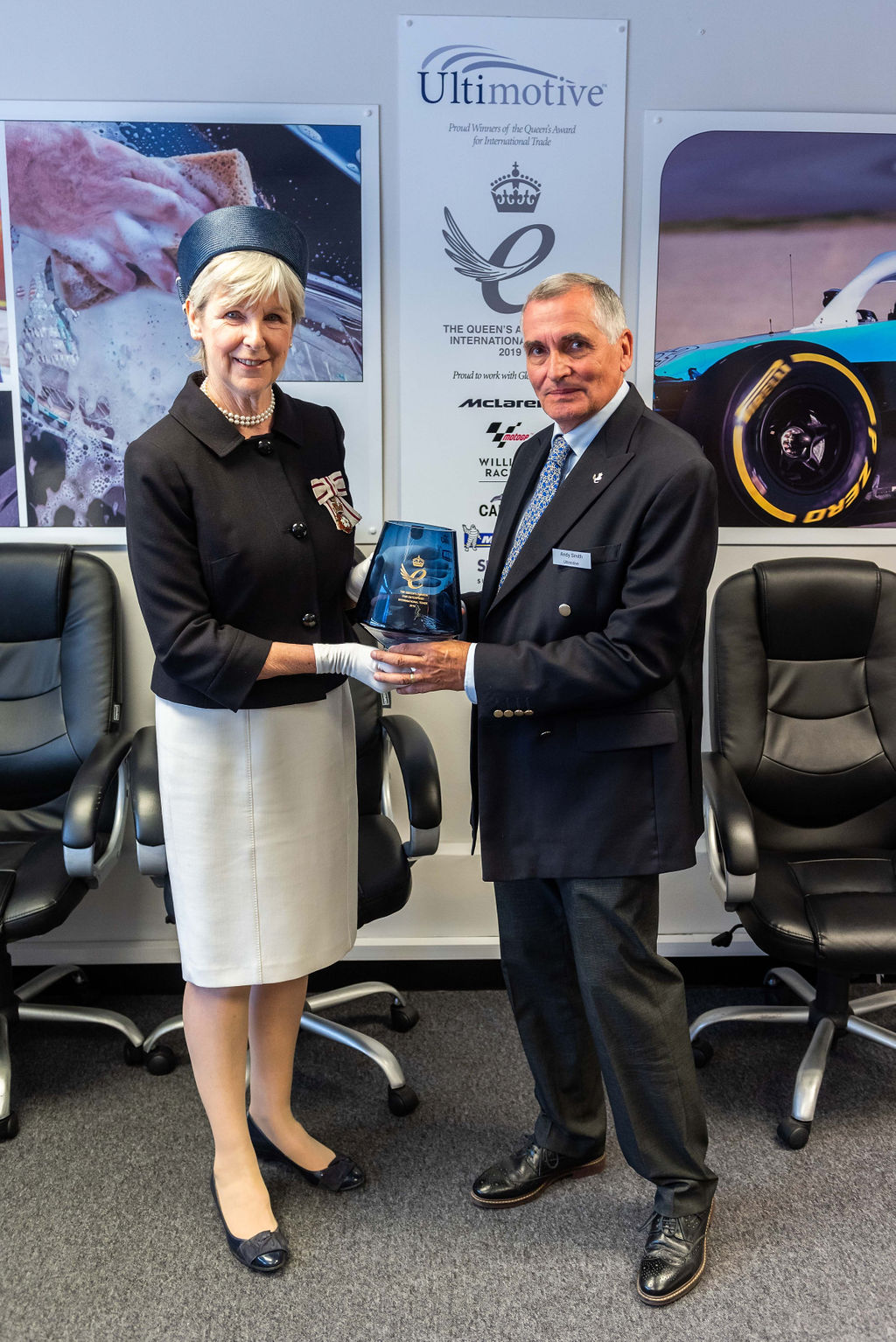 announced that Mrs Jennifer Tolhurst, Her Majesty’s Lord-Lieutenant of Essex, officially visited the company’s headquarters for an award ceremony.  The company is one of only three Essex-based organisations that received the Queen’s Award for Enterprise.  Ultimotive was awarded the accolade on 23 April 2019 in recognition of the company’s excellence in international trade.

Mrs Tolhurst presented the grant of appointment, personally signed by Her Majesty The Queen, as well as an engraved Dartington crystal bowl.  In her speech, Mrs Tolhurst noted that the Queen’s Award for Enterprise is the highest award that a UK company can receive. She praised Ultimotive’s success and in particular mentioned the notable increase in export sales of almost 300% in the period 2015-17.  The award ceremony audience included local authority representatives such as the Deputy Mayor, Council Officers from Braintree, Chelmsford, Essex and Colchester councils, St Helena’s Hospice and members of the private sector.

On receiving the award, Managing Director, Andy Smith commented: “It is thanks to this small team that Ultimotive has become one of the world’s leading brands in car cleaning chemicals.  As part of our success, we have extended our brand portfolio to include MotoGP and Turtle Wax Pro. As well as the Queen’s Award, we have also been awarded ‘The Innovation 50’, Essex Business Awards 2016 and were finalists in the East Anglian Daily Times awards.” Smith announced the exclusive news that the company has just signed a 10-year contract with McLaren Racing to supply products worldwide. “Last week, Halfords launched 16 of our products in 150+ stores in the UK and is increasing to all 400 stores by the end of September.”

Conservative MP for Colchester, Will Quince MP, commented, “Congratulations to the team at Ultimotive.  This award is not only excellent news for the company, but also for Essex as it illustrates the quality of commercial manufacturing in this part of the UK.  The Queen’s Award for Enterprise is a true accolade and is a perfect platform for the company to continue to grow internationally”.

The Department for International Trade has chosen to use Ultimotive as a flagship exporter in its nationwide ‘Exporting Is Great’ campaign.